Our heroes, Camelot Collective participated in their third festival, the Candler Park Fall Fest. This time we did not break even, the sun beat down on our booth and my eyes felt a little unfocused from all the card folding I had barely completed the night before.

By midday I was disgusted by my “cheerful portraits inspired by the plants, animals, and history around us.” I was neither cheerful nor inspired at the Candler Park Fall Festival. I had hoped people would laugh at the faces and postures of the dogs I painted, instead they seemed annoyed that I didn’t have a wider selection of dog breeds. I thought to myself that artists at these festivals are forced to make unobjectionable and predictable work because the booth fees are so high.

I began to feel ashamed of my portraits of women activists. If I had wanted to draw attention to the history of activism in the United States, why did I focus on portraits of activists rather than the ideas themselves? I have been listening to Eric Marcus’s Making Gay History podcast and my favorite episode is the one in which he interviews the inimitable Sylvia Rivera. Sylvia Rivera’s critique of assimilation within the LGBT rights movement inspired me to make the portrait series in the first place, but I was depressed by the cheerful, cloying cartoon I had drawn of her. Lisa assured me these feelings are normal when manning a booth full of your trinkets: the highs are high and the lows are low.

I was packing up our tent when I began to feel cheered by how organized we were and all the sweeties who were interested in our cards. Wasn’t it lovely to munch on raw broccoli in the shade with Carolyn and try to pay the perfect amount of attention to passers-by? Fall Fest was an honest day’s work and its emotional cadence didn’t feel that different than debugging an ambitious piece of code; although in the case of the former I lost around $200 for my labor. At least for the time being, the gypsy festival life is not for me. It is neither leisure nor a living; it occupies an uncanny valley between creating branding and developing a unique artistic sensibility. I admire my friends who make this physically demanding work their livelihood and make amazing, collectible art at a delirious pace. 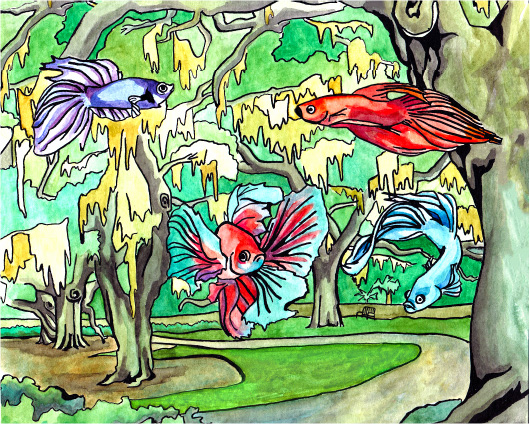